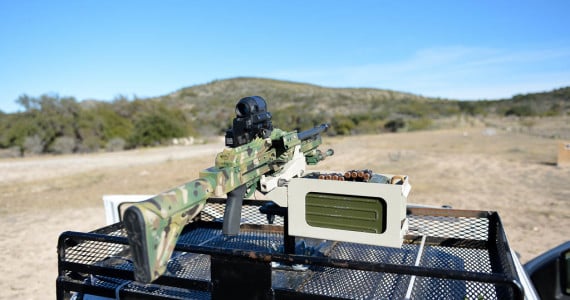 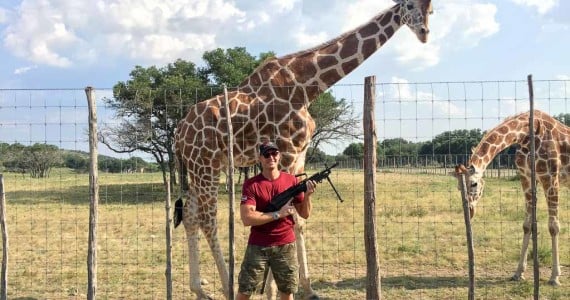 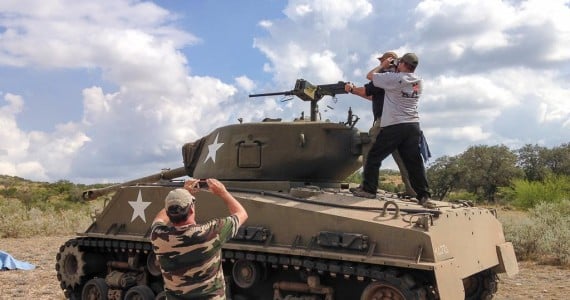 One of the more popular activities at Ox Ranch is machine gun shooting . We have partnered with Drivetanks.com and are now offering guests a chance to shoot machine guns, mini guns, flamethrowers, mortars, artillery, and real WWII tanks!

The M2 Browning nick named “Ma Deuce” is a belt-fed .50 BMG heavy machine gun. It was designed by John Browning in 1918 and weighs over 84 pounds! The M2 is an older design, however, it is still in use today as America’s primary .50 Cal machine gun. It is commonly found mounted on tanks, hummers, and on the side of helicopters. This is an extremely loud gun that surprisingly has little to no recoil when mounted. It is exceptionally easy putting rounds on target, and can be best described as pointing a laser pen as you aim. You simply lead the rounds into to your target and can do so effectively over 2,000 yards!

The .50 BMG M2 Browning is by far the biggest and funnest machine gun to shoot at OX Hunting Ranch, unfortunately, our costs are also about 5x higher then any other gun!

The Russian PKM is a 25 pound, 7.62x54mmr belt fed general-purpose machine gun. The PK was designed in the Soviet Union by Mikhail Kalashnikov in 1961, and later modernized to the PKM variant in 1969. This is still the main general-purpose machine gun of Russian forces, and is used by dozens of countries around the world. It fires 650-750 rounds per minute and has an effective range of 1,100 yards.

We highly recommend shooting our PKM, over any other machine gun we offer! It shoots a larger caliber then the M249 SAW, has the cheapest rounds, is the most reliable, and is the funniest to shoot with the exception of our M2 Browning!

The M249 SAW (Squad Automatic Weapon) is a belt-fed and gas-operated light machine gun. The M249 entered military service in 1984, and is still in use as the primary machine gun of American forces. OX Hunting Ranch has the SPW variant, which was designed to meet USSOCOM special operations requirements. The Special Purpose Weapon (SPW) variant cannot be mounted to vehicles, has a Picatinny rail for optics, a vertical foregrip, and a lightweight 36 inch barrel. The biggest overall difference is that it was slimmed down to weight about 13 pounds. The M249 machine is capable of 850 rounds per minute and has an effective range of 870 yards.

The M4A1 carbine is a fully automatic variant of the AR-15 and M16. The AR-15 was designed by Eugene Stoner and was orignally manufactured by Armalite, in 1959. Armalite ran into financial problems and sold both the design and AR-15 trade marks to Colt.

Colt made minor modifications and named the fully automatic variant the M16. The M16 was adopted by the United States armed forces, and soon there after deployed to the Vietnam war. The AR-15 name was chosen to sell the semi-automatic version to civilians. There are hundreds of companies today selling AR-15 clones, they’re considered clones since Colt technically owns both the name and trademarks.

The US military has replaced the majority of their M16’s with the lighter and shorter barreled, M4 rifle. The M4 has a 3 round burst firing mode where as the M4A1 has a fully automatic switch. There’s been numerous minor improvements over the years with many different variant names, way to many to discuss here!

The MP5 is the most popular sub machine gun in the world, and has been featured in hundreds of movies! It was developed by the German arms manufacturer Heckler & Koch, in 1960. The MP5 is the ultimate close quarters sub machine gun, and comes in over 100 variants! (we demo the most compact variant the MP5K)

The FN P90 is a personal defense weapon that was developed in 1990, by FN Herstal. The P90 along with it’s proprietary round the 5.7x28mm, was created in response to Nato’s request for a 9mmx19 Parabellum cartridge replacement. The gun and caliber replacement was required to have greater range, accuracy, terminal performance, penetrate body armor, and weight less then 6.6 pounds.

A Personal Defense Weapon (PDW) is considered to be a hybrid between a sub machine gun and a carbine rifle. They typically fire smaller calibers at much faster velocities, providing better penetration and accuracy!

NO GUN RENTAL REQUIRED!!!  Weapon, Briefing, Range Time, and Range Master are all included in the price per round.