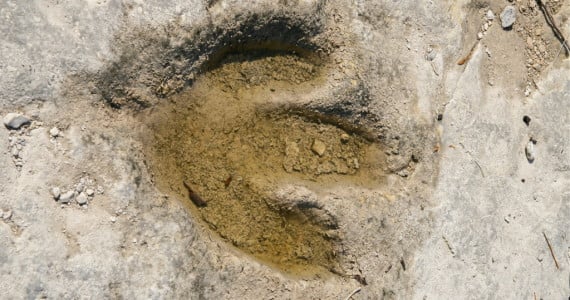 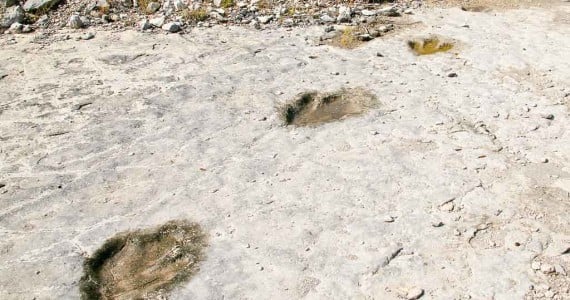 Ox Ranch is blessed to have such a colorful and unique history.  We are doing further research; however, the little that we have discovered is truly astounding.

The ranch’s earliest notable history traces back to the days of the dinosaurs.  We have museum-quality Tyrannosaurus “T.rex” tracks embedded into an old river bed.  There are two sets of tracks that split apart before circling back together.  It appears as if the T-Rexes were participating in one of the property’s first hunts!

Ox Ranch has dozens of Indian mounds scattered throughout the property.  Our guests have found hundreds of arrowheads and bird points to take home as souvenirs, some as old as 8,000 years (older than the pyramids)!  We believe it was the Seminole, Comanche, and Tonkawa Indians that once settled our land.

The American Civil War broke out in 1861 and lasted until 1865.  We have no proof of any large battles taking place on the property, but we are confident that the Confederacy used our bat cave to harvest guano.  The bat guano’s high nitrate content allowed for the Confederacy to turn guano into gunpowder.  The bat cave was missing for decades and was rediscovered in 2013.  The cave contains many bats, snakes, and a giant 30-foot-high mound of guano. The current owner of the ranch, Brent Oxley and developed a serious case of Histoplasmosis after rediscovering the old cave. Mr. Oxley, along with a few others, were sick for over three months as a result of inhaling the bat guano dust.  The symptoms included fatigue, dizziness, headaches, night sweats, and temporarily impaired vision.

On July 28, 1866, the U.S. Congress authorized six regiments of black troops, known as Buffalo Soldiers, to be enlisted into the U.S. Army.  We have evidence supporting that a small Buffalo Soldier outpost was on the property. The outpost may no longer be visible due to fire, but its remnants still litter the ground.  Our metal detecting efforts have discovered multiple horse bits, horseshoes, and even a Buffalo Soldier button in its vicinity.  We believe the outpost was established to protect wagon trail settlers en route to Fort Stockton and San Antonio.

In 1870, Baron Edward Von Woehrmann, a member of German Royalty, brought the first sheep to the area.  The history records show that Baron Von Woehrmann raised sheep as well as mined over 20,000 ounces of silver from a mine located on the property.  Legend has it that he was hung for encroaching on a cattle farmer’s land; however, after reading the record books, we discovered that he died from a gunshot wound to his back.  We believe it is much more likely that Baron Von Woehrmann was killed for the silver rather than a couple of sheep!

In 1958, part of the ranch was owned by the former Governor of Texas Dolph Briscoe.  Mr. Briscoe had the Army Corp of Engineers build a giant dam on the property to enhance his private “fishing camp.”  The camp entertained many famous visitors including former Vice President John Nance Garner for his 90th birthday.

If you have any questions regarding our History, please don’t hesitate to contact us. We recommend making reservations well in advance to secure availability.

About the OX Ranch