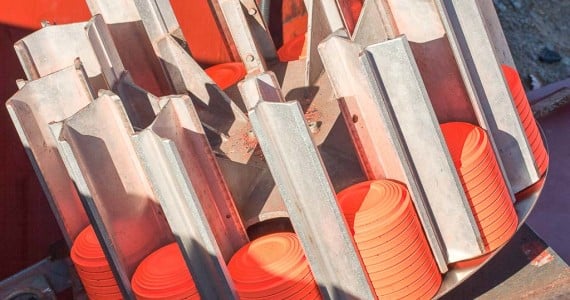 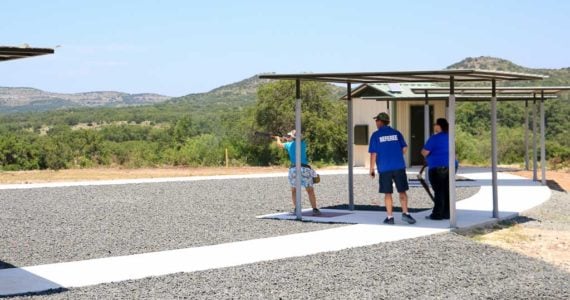 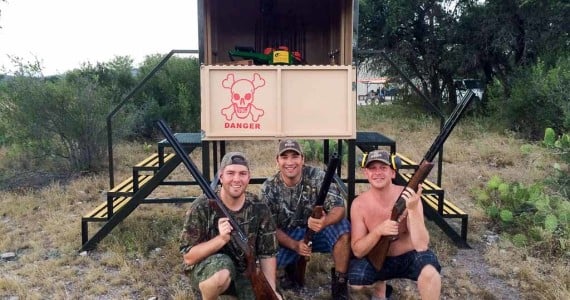 There are very few sports in life as enjoyable and exciting as clay pigeon shooting! Ox Ranch offers skeet shooting, trap shooting, 5 stand, and wobble traps. Clay shooting is the perfect activity for all skill levels and ages!

Skeet is an American shotgun sport that requires one box (25 shells per box) of shotgun shells per round. Skeet involves eight shooting stations placed in a semi-circular arrangement. There are two machines called a “High House” and a “Low House” that will shoot clays at your various positions. [expand title=”Station Directions” trigclass=”noarrow”]

Stations 1-2: You will start at Station One which will have the High House to your left. You will take a total of four shots at each of these stations. The High House will fire first, Low House second, and then a double of both houses firing, with the High going off momentarily before the Low.

Stations 3-5: You will take a total of two shots at these stations with the High House firing first and the Low House second.

Stations 6-7: You will take a total of four shots at each station. The High House will fire first, Low House second, and then a double of both houses firing, with the LOW going off momentarily before the High.

Station 8: This is the final station that is exactly in the middle of the two houses. You will take a total of two shots with the High House firing first and the Low House second.

*A shooter gets one extra shot for the very first target they miss. If no targets are missed, shooter must fire his 25th shell at the Low House Station 8 to get a perfect score of 25.
[/expand]

If you wish to keep things casual and focus on having fun, 5 stand is for you! One of the best features of 5 stand is that up to five people can shoot simultaneously. 5 Stand is a miniature version of the popular game of sporting clays, sometimes called “Golf with a Shotgun.” Our 5 stand has eight machines that launch rabbits, overheads, chandelles, high house shots, low house shots, teals (high flyers), and incoming birds.

The official way to compete at 5 stand is shooting what the menu displays at each of the five stations. This will require a box of 25 shells and will involve shooting both singles and pairs.

Trap shooting has been a sport since the 18th century when real birds were used. Trap shooting involves a machine that moves slowly side to side and throws clays away from the shooter. There are 25 targets in a “round of trap” which allows a shooter 25 turns. A shooter will take five turns at each of the five different trap positions in a round. The positions are located 16 yards away from the trap house for beginners and up to 27 yards for experts!

Wobble trap is similar to trap shooting, but with two main differences…..

1. The trap machine is moving widely both side to side and up and down!

2. You get two shots instead of one.