If you’ve followed our whitetail breeding series, you know we’re serious about quality deer genetics on Ox Ranch and want to ensure the best possible buck and doe development.

As I said before, we went with ¾ acre for each deer pen. Start with a 250’ X 250’ Square pen and cut them in half to make to triangles. At the small end of each triangle I put a 16’ gate that opens into a 16’ alleyway. Making sure that each gate will close off the alley and that when open the deer will be headed toward the deer barn. And when deer are returning from the barn will funnel back into their pen.  Alternating the diagonal cut of the pens so that we have two 16’ gates next to each other on each side of the pens. This saves on material when setting corner posts to hang the gates. So when feeding each time, you stop in alley and can access two pens. On the opposite side of each pen, I put 4’ gates side by side so I could access two pens at each stop. When you want to push the deer to the deer barn, you open the 16’ gate and go around and walk in the 4’ gate. The pen is shaped like a funnel so as the deer go to opposite side to get away from you they cannot help but find the gate. I find that if you build square pens that deer tend to go to the side opposite of the gate and are much harder to push out of the pens. 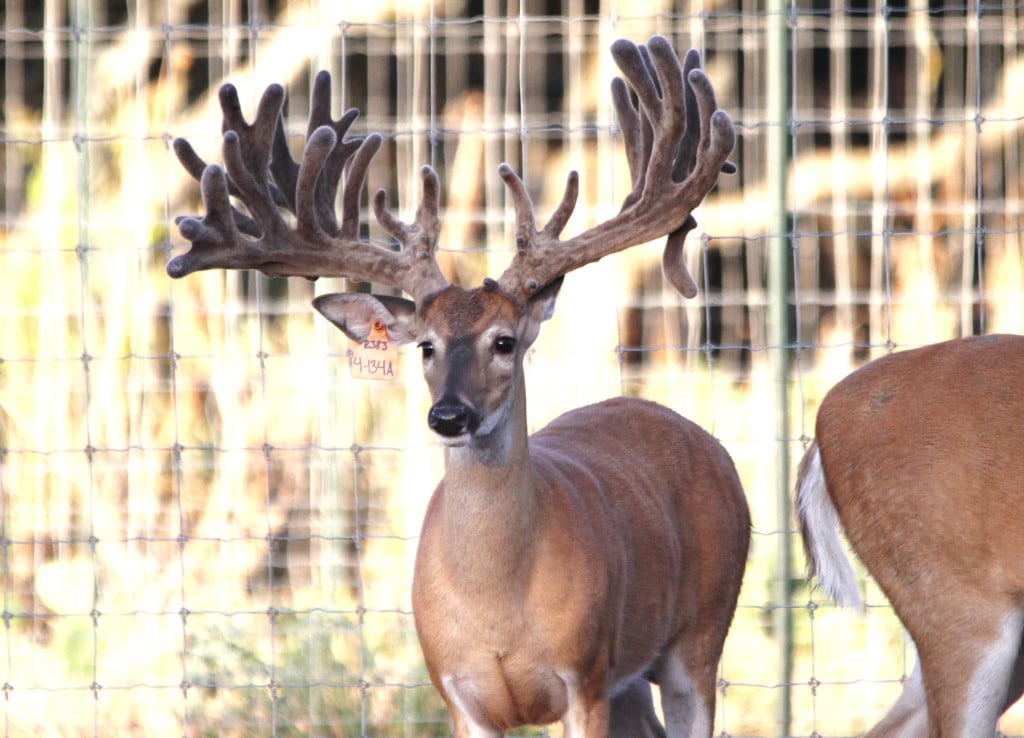 On the wide side of the pens, I put 18’ x 21’ carports for shelter from sun and rain. The prefab carports are perfect for this and can be bought for around $900 including delivery and setup. You cannot build them yourself for that price, I do not believe. Positon the carports about 6’ off the fence so the deer have plenty room between the uprights and the fence. Under the north end of the carport, is where I placed the concrete water troughs. This is important so the troughs stay in the shade as much of the day as possible. The cooler the water is during the summer months; the more water the deer will drink. By being in the shade, it also slows down the algae growth on the sides of the trough. The cleaner and cooler the water is, the more the deer will drink, and that is especially important in the hot summer months. I went with a concrete trough that has a separate compartment for the float valve. Deer tend to mess around with the water floats and break them if they can get to them. This trough cost around $350 each with the floats but the floats are completely protected. You can get troughs and floats for as cheap as $150 set up. I feel the extra money spent on the troughs is worth it. It saves countless man hours fixing broken and leaking floats. And if the float breaks and causes a flood in one pen, it might stop the flow of water to other pens. In the summer, after 48 hours without water, deer start to have serious health issues and death after 72 hours.  I added a 6’ bunk feed trough under each shed as well. These are for treats and textured feed. I feed each pen of deer a few raw peanuts each day. The deer like them and will come up to meet you each day. This helps when checking the pens daily for any health issues. The textured feed will not flow in the bulk protein feeders. I will give the does a pound of textured feed each when it is close to fawning time. I will continue this until the fawns are weaned. The textured feed is higher in carbohydrates and fat. This is helpful for the does when late in pregnancy and producing milk for the fawns.

On the wide side, a little way down from the shed is where I put the bulk protein feeders. I chose to go with the Outback breeder pen feeder. They are the most expensive feeders, but also the best constructed and longest lasting in my opinion. The main thing in choosing a feeder for your doe pens is that has the fawn tubes. These are feed tubes that are lower than the regular tubes for the adult deer. Fawns will start trying foods as early two weeks old. Being able to reach the protein feed will give the fawns a good head start on life.

On the opposite side of the pen by the 16’ gates, is where I placed the alfalfa feeders. I purchased the Crossfire two bale alfalfa feeders. I moved these across the pen by the larger gates for two reasons. One it forces the deer to come down to the narrow end by the gate. That way when trying to push them out of the pen they are comfortable at that end of the pen. And two, the big gates are much easier to back of a truck or UTV to fill the feeder with square bales. Some people choose to hand feed alfalfa to lower the costs. I feel that by having free choice it is better for the deer. That way each deer has a chance to get some and not just the dominant does in the pen.

With the way I choose to lay out my pens, alley ways, feeders and water, you can expect to spend $8500 for each pen. I will hold about 15 does and a breed buck in each of these breeder pens. In the pens that are just bucks for growing out, I will hold 20 in each pen.