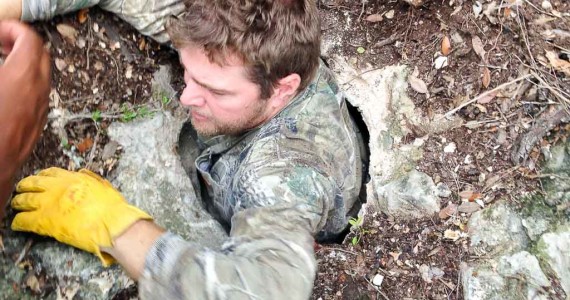 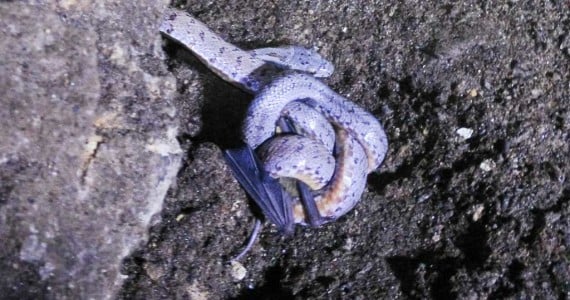 I have a passion for adventure and love going places no man has gone before. That’s a difficult passion to quench, considering just about anywhere you go these days you have a line to wait in.

I purchased Ox Ranch three years ago for the sense of adventure, to play with guns, and of course, to discover a past that has since been lost with time. In this period, I have made many new discoveries. To name a few…

One of my first major finds is what we call the Bat Cave. In order to enter this cave, you have to hike half way up a mountain and rappel over 24 feet into a small hole. After a few feet of crawling, the room begins to open up into a ginormous cavern with 60-foot-high ceilings!

This cavern is filled with all kinds of wonders. It has stalactites, an old wooden ladder that disintegrated in my hands, wires, and a giant 30-foot-high pyramid of dirt. I was told numerous times that the “dirt” was actually bat guano; however, I refused to believe this since we hadn’t seen any bats. I also found it much more palatable to tell myself that it was dirt than to deal with the reality that I was swimming chest deep in bat poop!

Tony, Rhonda, Chelsea, and I eventually decided to enter the cavern at night to see if there were any bats. It was incredible! Thousands of bats were flying all over the place! They would fly within an inch of our faces before darting in a different direction. It was one of the coolest experiences of my life watching all these bats fly around. It became even more exciting when we went deeper into the cavern and began to see the walls and floor covered with incandescent looking snakes. We witnessed two separate snakes strike and rip their prey right out of the air! The whole experience was an amazing adrenaline-filled night. The only downside was that the bats were stirring up the “dirt” which got into our eyes and throat.

It turned out that the dirt pyramid was, in fact, made of guano. The four of us awoke the next day with a case of Histoplasmosis, also known as caver’s disease. This disease is acquired from breathing in bat guano! Yes, we were all sick from bat poo, and its fungal spores were spawning in our lungs!

I immediately began to Google everything I could find on the disease. The results seemed pretty grim, with almost every article mentioning blindness, death, and other long-term debilitating effects. I couldn’t find a single article that showed anyone ever making a full recovery from this disease.

I also read that the anti-fungal medications doctors prescribe are a last ditch effort. In the case of Histoplasmosis, the cure is often worse than the disease!

The first few days of life with Histoplasmosis weren’t too bad. It felt like your typical flu. Day by day, however, the disease progressed as the fungal spores spawned in our lungs. On the fourth day of the disease, I started having severe migraines, shortness of breath, fatigue, loss of appetite, and sore muscles throughout my body.

A week into the disease, I began to feel dizziness, nausea, and blurry vision. I truly thought I was going blind between my symptoms and everything I read on Google. I continued to have these symptoms until the 15th day when I began coughing up what felt like a lung. This is about the same period I began having night sweats and found myself shivering while being in a 104-degree hot tub.

I thought I was getting worse, but in reality, it was my body finally fighting the fungal invaders off. The night sweats and shivering lasted about 2-3 days before I slowly began to feel better and more like my old self. It took a few months to kick the cough, but I eventually had a full recovery. In fact, we all did!

I Learned a Valuable Lesson………

I learned that I’m not Batman and that I shouldn’t be playing with bats. Instead, I find myself attempting to be Spider-man! I recently explored a cave in which I was bitten by four Brown Recluse spiders. That, however, is another story for another time!